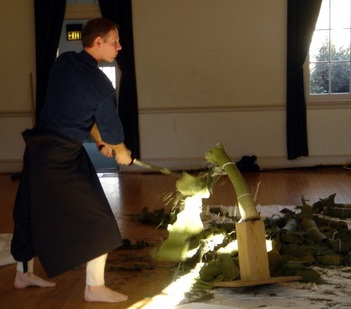 Triangle Aikido offers a study group for Jodo and Iaido. The group practices Shindo Muso Ryu Jodo, which teaches the use of a staff (jo) to defend against a sword, and Muso Shinden Ryu Iaido, which teaches the motions associated with drawing a sword from its scabbard, striking or cutting an opponent, and then replacing the sword.

The study group is led by Ned Danieley. Ned is a student of Rick Polland, head of the Beikoku Rembukan Dojo in Annapolis, MD. Ned has over 30 years experience in the martial arts and is the chief instructor of Triangle Aikido. He has studied jo and iai with Polland sensei since 1999.